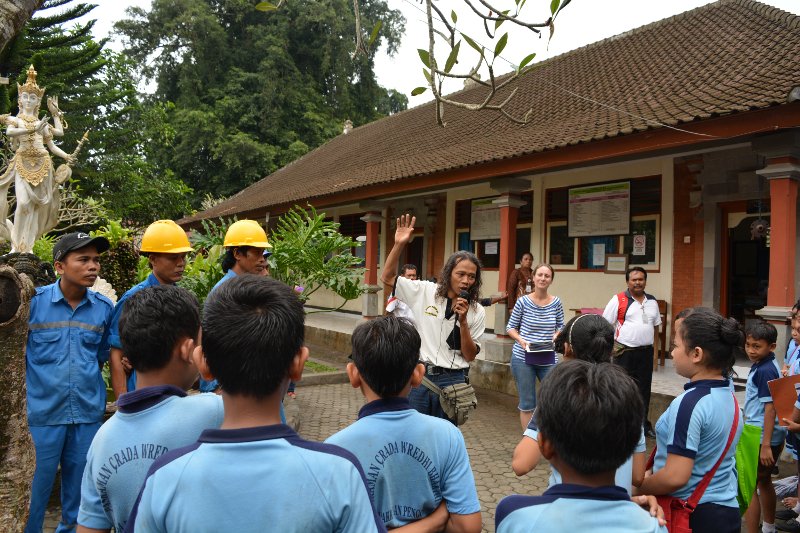 "We work for Mother Nature and for God,” says Pak Supardi, the founder of RKP. “Please don’t disturb us. If you challenge us, we won’t run away." The words ‘trash’ and ‘waste’ are never used. Instead they focus on cleanliness. This message is reinforced on the collection vehicles which say: ‘Proud to keep Padangtegal clean.’ "

Waste workers are considered the fifth and lowest class caste in Bali, Indonesia.  They fall in behind the next lowest class – farmers and everyone else. Priests come first, followed rulers and knights (second) and tradesmen (third).

But waste workers at Rumah Kompos Padangtegal (RKP) in Ubud – the spiritual hub of Bali – hold their heads up high.

They’ve elevated waste management to a spiritual significance by following the Balinese principle ‘Tri Hita Karana’ in which true wellbeing is believed to be only experienced when there is harmony between God, one another and nature. Good waste management practices go far deeper than the ugly, smelly piles of trash.  They believe waste management is a reflection of who we are as human beings. It’s about caring for one another, by caring for the Earth. Every element of their waste systems supports this underlying notion.

Instead of accepting a fifth-class status, they see themselves as “clean warriors” with the noble responsibility to keep their communities clean and to prevent further environmental destruction.

They wear blue and green helmets, gloves and military-style uniforms with pride to demonstrate the seriousness and importance of their jobs. They look (and act) like a professional army.

“We work for Mother Nature and for God,” said Pak Supardi, the founder of RKP. “Please don’t disturb us. If you challenge us, we won’t run away.” The words ‘trash’ and ‘waste’ are never used. Instead we focus on cleanliness. This message is reinforced on the collection vehicles which say: ‘Proud to keep Padangtegal clean.’ Workers wear clean uniforms. They sort waste the day it’s collected and then transfer it to its next location each day, cleaning up as they go and leaving the floors of the facility immaculate.

Perhaps unsurprisingly, RKP has been particularly effective at inspiring residents to sort their waste into organic and non-organic fractions.

Every household is given three bins with their names printed on them: a green one for organics, a blue one for non-organics, and one to use as a household composter.

When the waste collectors arrives, he will shout out the household name and then shout out either ‘good’, ‘bad’, or ‘terrible’ depending on how well the waste is separated, while the other collector records it in a book.

Not only does this help to record household compliance but it also applies some serious social pressure. With this system, everyone knows how their neighbours are doing. Too many ‘bads’ or ‘terribles’ are followed up with an SMS, in-person discussions, and reporting to the religious authority.

Non-compliant families receive messages like: “You’re one of only five families which does not separate its waste. We can’t get to 100% separation because of you. Please separate your waste.”

Pak Supardi explains:  “If you want to protect a tree, you logically explain how trees are vital – because they release oxygen, store carbon, improve air quality,  conserve the water and soil, provide a home for wildlife  – yet people will still cut down the tree.

Why?  Because people have a hard time equating one tree with all of that. But the tree won’t be cut down, he says, if you tell people not to cut the tree “because God resides there.” This notion is easier for people to understand and connects them emotionally.

Even with all these efforts, only two thirds of residents sorted their waste. As they were determined to achieve 100% household sort rate, and armed with Pak Supardi’s background in journalism, they got creative and embarked on many things, including: Given the highly spiritual nature of the Ubud community, they decided to appeal to the religious authority.

Within Bali, the two governance structures work in parallel – an administrative/ government structure and a cultural/religious structure, which is often more powerful.

To this religious authority (the Banjar), they brought the names of the worst offenders, yet the Banjar leaders did not have the heart to call them out on it. This was a close-knit community and many people on the ‘bad’ lists were friends or relatives of Banjar leaders.

They needed to approach this a different way. They asked the Banjar to issue a letter announcing that they would only collect a household’s waste if it was properly sorted. All mixed waste would be left behind.

The Banjar leaders then gave their formal blessing and the letter effectively became religious law, locally known as awig-awig.

Residents had a few months to prepare for the change. When the day came, RKP stuck to their position and left behind mixed waste.

By the fourth night, collection drivers were threatened with physical violence and founder Pak Supardi accompanied them as a protector and stayed with them for the remainder of the time.

Workers felt tremendous pressure and wanted to quit. Still they stuck to their position and did not collect the unseparated waste. Beyond appealing to the religious authority of the Banjar, they appealed to an even higher authority to help them remain steadfast.

By the seventh day, the last “hold-outs” broke and waste was finally separated.

As painful as those first few days were, 100% of village residents have separated their waste since.

Would you like to learn more about Rumah Kompos Padangtegal (RKP) and the work of this group in Bali?

The Vision of RKP is to make the traditional village of Padangtegal a clean and green village, as well as a pilot village in terms of waste management.

The Mission is to promote a new perspective that waste is a resource,

For more on RKP, go to: http://www.rumahkompospadangtegalubud.com/

To learn more about this case study—and similar ones on how to transform communities to take responsibility for waste —in the new book, Leave No Trace: Vital Lessons from the Frontline of Waste and Ocean Plastic (available for download at https://www.vitalocean.org/book-download).